Oy Juho Jussila is a family owned business, which is already in hands of fourth generation. The company was founded in 1923 and changed into a limited company in 1934.

Juho Jussila was born in Hollola, in Wesala village, 6. of August in 1874. He was the youngest child in family having nine children. After his grammar school Juho Jussila continued his studies in Hämeenlinna and after this period he filed to Jyväskylä seminar where he was able to study together with his brother Aatu. Mostly male students in seminar came from the poor farmer families having no possibilities to give proper living conditions for all of their children.

After graduating 1896 Juho Jussila taught in Jaala. Juho’s bride, Ms. Tyyne Lohi, graduated one year later and the couple was married in the autumn 1897. The young couple moved first to Savo and they worked as teachers in Heinävesi. After two years they moved to Pori and then to Rauma. Four children were born to the family, three sons and a daughter: Erkki, Tellervo, Pauli and Kauko.

Practically saying all of simple wooden products used in normal house hold were imported from foreign countries to Finland in the beginning of 20th century. Juho Jussila started to think the reason for this and he tought why it must be like that? Why Finnish people cannot manufacture the same products in Finland because the country was full of cheap and good raw material? Juho Jussila travelled around the country and kept presentations for home and small size industrial family business principals.

Being inspired of his own ideas he decided to manufacture some of his own wooden articles. He designed ink dryer, line ruler and paper knife. This way Juho Jussila got the touch to business life and some extra incomes to his low teacher’s salary.

Mr. Juho Jusila travelled first time to Germany when he lived in Pori. In Germany he studied German wood industry and manufacturing of wooden products. After his second trip to Germany he started to design his first pedagogial wooden toy set. In 1909 he rent his first stand at local Pori Farmer Show. In the beginning of the year 1900 Pori was an important saw mill town in Finland. The purchase of raw wood material was easy and transport distances were short.

In 1911 Juho Jussila let his application to a new position in Jyväskylä seminar as a leading teacher of the excersice school. After giving his educational presentations he was named at first for two years period to this new public post. The official public post document Juho Jussila received in 1913. His wife, mrs. Tyyne Jussila worked as a teacher in new grammar school at Puistokatu, Jyväskylä. Shortly after this change in Jussila family died their 9-year old daughter Tellervo 1914 to diabetes.

Most students came from poor farmer families to the exercise school. In the beginning of the 20th century was the student welfare on very low level in Finland. The health care and health of students were both insufficient that time. Clothes, food and cleannes were also insufficient. The improvement possibilites of the school were absolutely near zero. All teachers proposed to private citizens and the city of Jyväskylä that it was necessary to use private and public resources for new school kitchen system and offer daily meal to students.

Jyväskylä founded a common restaurant for students of exercise school and primary school. Mr. Juho Jussila and his wife Mrs. Tyyne Jussila were both practical common founders of students restaurant together with other teachers and private persons. Teachers and students made themselves 10 years warm lunch for around 200 children and all this was made by private financing and own work force. When Cygnaeus was ready built in 1925 the restaurant was transferred to Jyväskylä town property. Jyväskylä took care of restaurant and its cost. In 1941 the Parlament of Finland decided to give free lunch for every pupil in the school but war time generated many kind of limits in this case.

Teachers knew well all kind of problems of food, clothing and general healt care among pupils. Teachers established a private foundation for financial support of clothe purchase for pupils. In 1929 began a day light care of pupils to avoid rickets which was a cause of lack of D-Vitamine. Mr. Juho Jussila purchase an alp sun lamp and gave once 200 appelsines as a very special present to pupils.

After his move to Jyväskylä Juho Jussila had many projects for starting his own business. The unstable social and political situation in Finalnd during the last Russian empire years moved his plans to later times. On the 5th of February 1923 Juho Jussila finally stated his announcement of a new firm in Jyväskylä city administrative court. The first products of the new manufacturing shop were snow paddles, kitchen ladders and mangels. Almost together with a new start the family Jussila met sorrow again because Pauli Jussila died to diabetes at age 17.

The manufacturing of Fortuna Game started in 1926 and this game was a result of many tought and influences which Mr. Juho Jussila has collected duirng his carreer as teacher. The game was in use of calculation studies in exercise school.

The export of products was the main target for Mr. Juho Jussila. The first start in export business succeeded especially good in 1929. The manufacturing quantities enlarged very fast and during the same year Juho Jussila got one test order from England. Fortuna became a great success almost over the night in England. This meant a great success to Jyväskylä town because unemployment was on high level and Europe suffered of the great depression too. Fortuna helped also the company over the hard times with hundreds of thousands of Fortuna games.

The marketing of Fortuna Game in England was on especially high level. The Fortuna Game was renamed as Corinthian Bagatelle. The Royal Family, famous actors and actresses, football players, golf and cricket game players all played Fortuna Game. The Prince of Wales said that Fortuna game was fine and the most sophisticated game of its art. Because of his interest to the game he endowed many games to clubs of unemployed workers and clubs of younger boys. The example of Prince of Wales let the others become interested in Corinthian Bagatelle. The game was introduced to numbers of game halls, charitable organizations and all kind of clubs all over the England. Many competitions were organized by Corinthian enthusiasts and real English games – like backgammon and bridge – were in danger because of Corinthian Bagatelle’s popularity.

Famous actors and among them Jack Buchanan and Anna Neagle promoted game. Afonso, the King of Spain, Mussolini and The King of Belgium were players of Corinthian Bagatelle. In Finland promotion of the game was partially Finnish because Ukko-Pekka (State President of Finland in 1930’s), Prince of Wales, Mussolini and Emperor Wilhelm were enthusiast Fortuna players. Fortuna Game was very popular in Finland and competitions among the personnel of Castle of President were well known in the country. The golden age of the Fortuna stayed at the end of 1930’s. It has never been calculated how many Fortuna Games really have been sold all over the world but only England represented approximately a quarter of million games in 1933.

The manufacturing and wider product assortement

The son of Mr. Juho Jussila, Erkki Jussila worked for ship yards in Canada and United Sates in 1929-30. He came back to Finland after the birth of family’s oldest child. His help in family company was needed at that time. He had learned English and his help was obvious when building business relationship with English customers. The help of engineer was welcome also when developing technics in factory. Mr. Erkki Jussila and his wife, Mrs. Lyyli Jussila, got three children more in next years

The good selling of Fortuna game and other products caused the situation in which rented factory started to be too small. In 1934 the decision was finally ready and a new factory building was under the construction and building located in Lutakko. In the same time the company was changed as a limited company.

Mr. Kauko Jussila, who promoted his medical doctor exam in 1935, worked for a while for the company after the move to Lutakko. His designs were pencil cases’ pictures and Tarmo Horse with wagons.

The sales of Fortuna game started to go slowly downwards at the end of 1930’s. At this time started the darts manufacturing. the Englishman, Mr. A. T. Hill proposed Mr. Juho Jussila to import darts to Finland. The darts was a sample for simple ring dartboard. Ring dartboards were in product program until at the end of 1960’s. Billiard’s manufacturing started in the beginning of 1930’s as test manufacturing and company Jussila’s Billiard boards became gold medal prize of national Finnish Trade Fair organization in 1935. Together with a small table billiards other five billiard boards were in manufacturing program. Billiard boards were made of wood and stone basements. In spite of that that company Jussila was the only manufacturer of Billiard boards in Finland the company discontinued the manufacturing of them in 1938 because its economic losses. Kolokolo Chess became to market in 1935. The idea of the game became obviously from Mr. A.T. Hill but the same type of game had been in use already in ancient Egypt named Mancala. the same game is in use in handy telephones named Bantumi “bean game”. The football table game P.P.S. became to product program in 1938.

Mr. Juho Jussila, who had been the manager of the company and worked at the same time as teacher, became his pension in 1937.

Thye subcontracting of wooden products started at the end of 1930’s. The company exported to England fish line reels, paintbrush handles and wooden plates for electric switch installations. The war started in 1939 interrupted this business completely.

In 1940’s the product program expanded and the manufacturing of school chairs and tables. The small log house collection manufacturing started too.

Mr. Juho Jussila died because of very serious illness in 1947 after his arrival from a long business trip to Argentina.

Mr. Erkki M. Jussila, the son of Mr. Juho Jussila, pensioned in 1975 at age 73. His work continued his son Mr. Erkki O. Jussila, who had started to work for company in May 1956 as chief of plastic department. 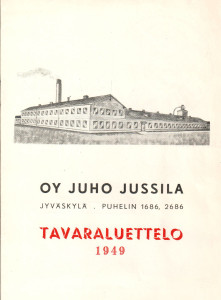 At the end on January 1951 were the first injection moulded products ready. The manufacturing program of plastic products was quite wide e. g. darts tails, wheels for toy trains and cars, different type of connecting parts of toys as well as small plastic blocks. Very soon started the manufacturing of spoons, plates and mugs as well as plastic coat racks and hooks. many people living in 1950’s can remember plastic mugs made by company Juho Jussila.

In the same time started other companies made inquiries of the injection moulding services. The manufacturing of plastic products expanded a great deal because of subcontracting plastic products to to other companies. The new machinery came in the company and Mr. Erkki O. Jussila started to develop plastic department. The starting company Tetra Oy was merged earlier to the company Juho Jussila.

The business of plastic department increased strongly in 1960’s. The customers in vehicle industry, electrical industry and household manufacturing needed plastic products. In 1986 was the new factory building ready in Palokangas, Northern part of Jyväskylä. The old factory building location is not visible because there is now a four-line coast boulevard. Mr. Erkki O. Jussila retired after his 46 year working period in 2002.